UPDATE: Ursula and her fellow sea creature Karin have been arrested and taken into custody at Bowen Police station.

Over 20 ‘dead fish’, including ’Ursula The Sea Witch’ are currently blocking the access road to Adani’s Abbott Point coal terminal near Bowen, Queensland. The climate protectors, dressed in costume, are demanding a commitment to no new coal before the federal election in May.

Police, Abbott Point and Aurizon workers were on the scene as well, witnessing the funeral which is being serenaded by some mournful banjo and fiddle players.

Kimberley Croxford, a spokesperson for the action said:

“Right now, people around the world are losing their homes and livelihoods because of climate change. Without bold policy commitments to leave fossil fuels in the ground, our way of life will be altered forever.

“If we act now, we can all benefit. We can create a thriving renewable economy powered by local jobs and new opportunities for both rural and urban communities. If we do nothing, we will suffer from more extreme droughts, fires, floods – and the loss of the wonders of our world, like The Great Barrier Reef.

“We need to face the climate emergency together and urge government to reject dangerous proposals like the Adani mine.

“Traditional owners have clearly said no to mining the Galilee Basin and we stand with them.

“Neither major party has committed to protecting it from coal or gas.

“We are responsible for our children’s future. They deserve to grow up in a safe, exciting world full of wonder.

“Our government should be standing up for Australian families, not irresponsible companies who are willing to compromise our health, water and natural wonders.”

Thousands of people are mobilising across the country as part of The Bob Brown Foundation’s Stop Adani convoy, in a display of opposition to the mine. Last Sunday, 300 people attended an event in Clermont, which is the closest town to the mine site. A final rally will be held in Canberra on May 5, featuring a performance by singer Paul Kelly. 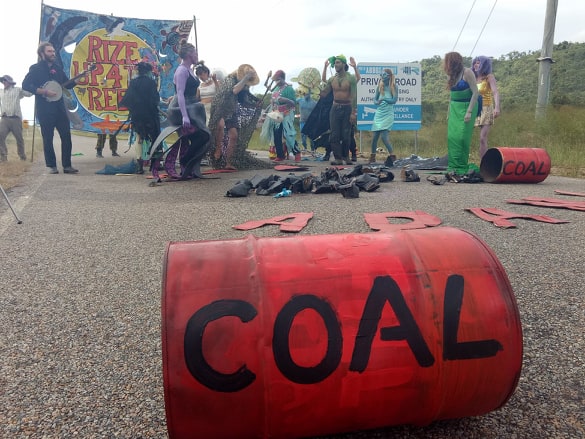