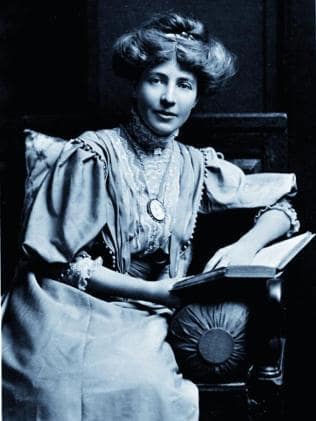 The first Australian political “lock-on” took place in 1908, in an auspicious location: the British House of Parliament. Muriel Matters grew up in South Australia, one of the first places in the world where women could vote. Moving to Britain and illegible to vote due to her gender, she went to parliament; where women were literally fenced off from proceedings by a metal grille. She locked herself to the grate and gave a speech on gender equality to a captive audience of politicians while police were forced to remove the grille.

It wasn’t the last time the tactic of locking yourself to things would be used by Australians seeking to change society. In Brisbane in 1965 some more women famously did so – Rosalie Bognor and Merle Thornton chaining themselves to the men-only bar at Toowong’s Regatta Hotel and demanding the right of women to be served. In 1969, Zelda D’Aprano locked herself to the doors of the Melbourne Arbitration Court building where she was frustrated at the fact that only men were inside the court arguing over whether women should have equal pay.

Like women’s suffrage, forest blockading was a political idea pioneered in Australia. And it was there that the lock-on really came into its own. Conservationists first chained themselves to bulldozers in the blockade to protect the Daintree rainforest in North Queensland in 1983. It was in the late 1980’s in the South-East forests of NSW that what we now call a “lock-on pipe” was first used to immobilise machinery – created and implemented by environmentalist Mark Blecher. Two steel pipes welded together at a 45 degree angle with a pin inside you can clip a bracelet onto, it’s a simple but effective design. Put it around a piece of logging machinery, and instantly your dissent is very difficult to dismiss. It’s been around the world since then and saved a lot of forests; but the lock-on pipe, like the Hills Hoist and the Stump-Jump Plough, is the result of classic aussie ingenuity.

Over the years different techniques were developed to make lock-ons easier and more effective – a bike lock around the neck, a concrete barrel dropped onto a road you attach yourself to, burying steel and concrete into a hole in the ground and fixing yourself that, pushing an old car onto the road and locking yourself inside.

It’s sad that mainstream Australian culture isn’t more aware of the history personal courage and creativity, plus tangible conservation gains, encapsulated in the image of someone “locking on”. Even so, there is a long tradition and culture attached to it – it is a symbol of rebellion and care; a rite of passage and badge of honour for activists. Lock-ons have taken place across every corner of this continent in all kinds of political campaigns, and immortalised in books and songs of all styles.

The lock-on is also a remarkable example of non-violent direct political action. Where so often in our society actions are taken to restrict the liberty of others, in the case of the lock-on it is yourself that you lock to something, going in defenceless and with the respect for your political opponent that they won’t start their machines and physically harm you.

Despite all this wonderful context, the lock-on is currently under attack. Last month, the Queensland government announced they had passed through cabinet a new piece of legislation; catchily titled Offences Involving Use of Dangerous Attachment Devices. It seeks to make it an offence carrying up to two years prison to use a lock-on or climbing device; and up to one year for being in possession of one.

To launch it, Police Minister Mark Ryan put out a press release that used the word “extremist” four times. Premier Anastacia Palaszczuk claimed she had been shown devices “laced with dangerous traps” designed to harm police officers who remove the person – like broken glass and butane canisters.

The implications were evidently groundless – in decades of locking on, there haven’t been reports of police responders being injured, much less exploded. If that was to happen, it would already be illegal and you can guarantee it would have been reported. Police themselves never claimed they had seen devices designed to harm anyone, saying in a statement they were “designed to delay the attempts of police to extricate protesters in a timely manner”. On a basic logical level, it doesn’t make sense – the activist locks themselves to the device, not anyone else.

Last Friday, the proposed legislation went to parliament. Another press release came out. References to booby traps were gone, though not with any apology to activists who had previously been accused of planting explosives. I had to spend ten minutes on the defensive from a journalist hounding me for non-existent violent acts, and I know I wasn’t the only one. The latest media release still claimed, spuriously, that the laws were all about the “safety of first responders”.

In classic “moral panic” style, the Queensland government has used the guise of safety to push through laws that are really about criminalising dissent. They’ve gone as far as renaming the devices: in media coverage and even in the legislation, the lock-on pipe is called a “sleeping dragon”, and the concrete barrel a “dragon’s den”. These sinister sounding names are good for media sensationalism, but in a decade heavily involved in direct action, I have literally never once heard anybody use either of these terms.

In blockading terminology, a “dragon” is an old car you dump on the road with someone locked on inside it (so called because it is something you “drag on” the road). But that’s not even one of the devices mentioned in the law. The government and media cannot possibly be so ignorant as to not realise this is language no one uses. This is a deliberate attempt, like the false implication there are explosives planted in the devices, to misrepresent lock-ons and the people who use them.

Beyond that, I find the misnaming of the devices offensive because it is taking away from us our culture and history – that bit of steel is not a “sleeping dragon”; it’s a lock-on pipe. And it’s been successfully used to protect environments across this continent for more than three decades.

Politicians and media want to pretend there is a stable and just liberal democracy that “extreme” acts like locking on threatens. But it’s just not true. The ability to protest – and not just tokenistic free speech, but actual effective disruptive protest – is part of what keeps a democracy functioning by giving everyday people a way to stand up to the disproportionate power of the wealthy. Many of Australia’s social and environmental policies we take for granted were born out of civil disobedience, and to maintain those institutions, or to hopefully improve on them, will require brave and morally forthright people doing the same in the present and the future.

The good news is that people will keep standing up (and locking on) for what’s right, no matter what threats the government makes. Those of us who study our history know this is true, and those following the news today will know that regimes far more repressive than Queensland’s still can’t completely crush dissent. This year alone, non-violent protest movements have overthrown dictators in Sudan and Algeria and stopped China’s extradition bill in Hong Kong. Two years in prison for locking yourself to a bit of machinery might sound harsh, but there is no penalty any government can impose that is more powerful than the human urge for freedom and justice.

The laws also won’t work because people can see through the government’s pathetic grandstanding. The continuing refusal, despite persistent warnings from scientists and activists, to stop human-caused climate breakdown is the great moral failure of our time. No amount of traffic chaos from a blocked city street can compare to the threat of more numerous and severe natural disasters. No safety hazard for police officers using power tools compares to the climate-related “health emergency” already declared by the Australian Medical Association. No illegal act of protest is nearly as extreme as being told repeatedly that your chosen lifestyle is threatening the existence of whole nations and species yet refusing to do anything to change it.

So you can take my word for it that people will keep protesting and keep locking on. But what about these laws? Will they pass? Will they stay in the lawbook forever as a monument to an era of politicians desperate to deflect attention from their own moral cowardice? Well they haven’t passed yet. In fact the government are still accepting public submissions on the laws until midday on Tuesday October 8th. You can make a submission following this link.

They are likely to pass though, with bipartisan political support outweighing the excellent critiques of the state’s solitary Greens MP Michael Berkman. There has been a sad lack of opposition to them from civil liberties groups (for whom forest lock-ons are a long way from their inner-city office terms of reference) or environmental organisations (who are so afraid of threats to their charity status they stay far away from anything that could be construed as illegal activity).

It’s a small minority who will stand up for the voiceless and beleaguered lock-on device. We need to do the best job we can to resist these laws, and I recommend making a submission before Tuesday. But the sad reality is that in our climate of fear and outrage, it is likely that government and business (no environment group was invited to contribute to the Parliamentary Committee on the laws, but for some reason Queensland Resources Council CEO Ian Macfarlane was) will keep using the veil of safety to push through laws that protect the status quo; even as ice caps melt and the planet burns.

The way to fight back is to courageously and creatively resist. Queensland has its own precedent here – in 1977 Premier Joh Bjelke-Peterson made protest gatherings illegal, saying “the day of street marches is over” and protest permits would be granted “over my dead body”. Thousands of people were arrested in demonstrations over a number of years, winning the right to protest which eventually was legally recognised with the Peaceful Assembly Act in 1992. It’s a long struggle we are in – one with the urgency heightened by the imminent threat of climate crisis but still a struggle that has gone on for a long time and will continue for a lot more.

Looking into our past can give us the perspective that civil disobedience has worked to change laws before and had its moral authority proven by the passing of time. Looking into the future can give us the perspective to know there are greater threats than repressive anti-protest laws. Looking around us will reveal that while the Queensland government moralises over activists in tripods or concrete barrels, they are still negotiating with Adani to give them a financial legup to build their climate destoying Carmichael mine.

To avoid the worst effects of climate change is a huge task and will require all people who care using all the tools at their disposal. Devices like the humble lock-on are a proven way for everyday people to stand up to the might of corporate greed and its government backers. So get out there and lock on – it’s a great Australian political tradition!