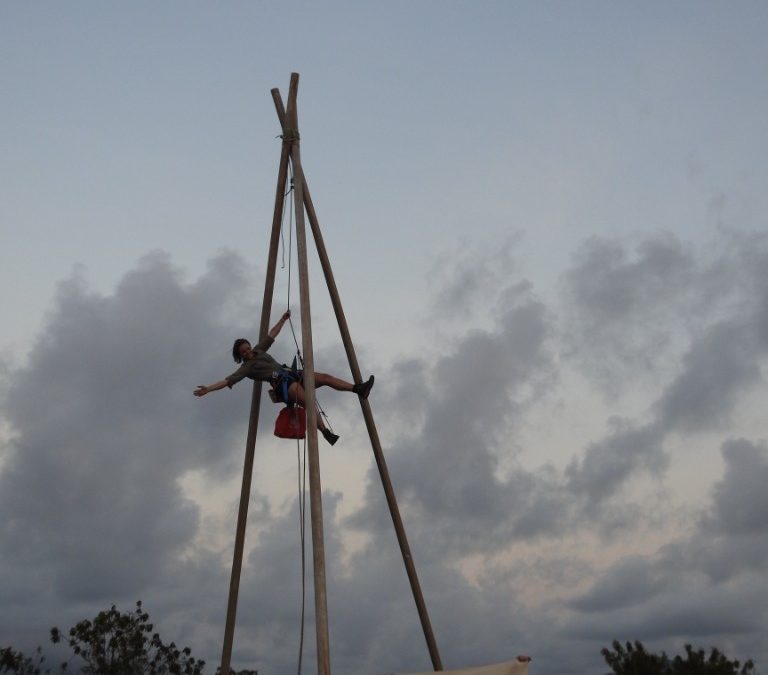 A young woman has blocked all coal trains on Aurizon’s railway from reaching Adani’s Abbott Point coal terminal this morning. Suspended from a tripod, Clancey Maher, 23, has halted all movement of coal for more than 3 hours and is calling on Aurizon and Pacific National to rule out any cooperation with Adani and the opening up of the Galilee.

This action is part of a nation wide campaign opposing the construction of Adani’s Carmichael mega mine in the Galilee basin. Adani has recently announced that it is seeking to use Aurizon rail infrastructure, halving the rail distance needed to join the Carmichael mine with the Adani owned export coal terminal, Abbot Point. This has sparked outcry from various groups including Galilee Blockade, who have threatened that if Aurizon remain complicit in opening the Galilee basin to mining, they may be painted with the same brush as Adani and targeted by environmental groups.

“Aurizon has been complicit in the export of coal for too long. In the face of growing cries for urgent action on climate change, Aurizon need to take an active stance in rejecting the proposed Carmichael mine and associated railway”. “Aurizon needs to urgently look at a business model that doesn’t rely on thermal coal, our planet and most life on it cannot afford to wait.” Said Clancey Maher

Pacific National, a haulage company operating in the Bowen basin alongside Aurizon, is also under pressure from environmental groups.

“Aurizon and Pacific National will continue to be targeted, until they refuse to participate in the opening up of the Galilee basin.” Maher

For nearly eight years Adani has boasted of building its own $2.5 billion, 388-kilometre standard gauge railway capable of carrying 100 million tonnes per annum to its export terminal. Recent news has vanquished any remaining faith in Adani’s grand plans to build this totally new railway, that would have linked the Galilee basin to Adani’s Abbot Point coal port.

Adani’s new low cost plan, with a lower capacity mine and shorter railway, will allow coal to be moved from the Galilee to port far earlier than was previously anticipated. This plan represents the thin edge of the wedge for the Galilee basin. Once coal starts moving to port, Adani will expand its operations using its newfound source of revenue. More mines will then join. If we let Adani get it’s way, combating climate change before we reach a tipping point will become all but impossible.

Under its now plan, rather than building an entirely new rail, Adani’s line will connect to Aurizon’s existing rail, which already links numerous coal mines in the Bowen basin to Abbot point. This means that responsibility for the opening of the Galilee basin now lies with Adani and Aurizon.

“We have heard the dire warning issued by the IPCC in their most recent report”. “they have said we must stop burning fossil fuels within 12 years to prevent an uncontrollable climate collapse”. “Adani’s 60 year licence for a thermal mine coal is exactly the opposite of what we as a species need to be doing, it is madness and we will not let it go ahead”.  Maher