Adani contractor locked up and blockaded 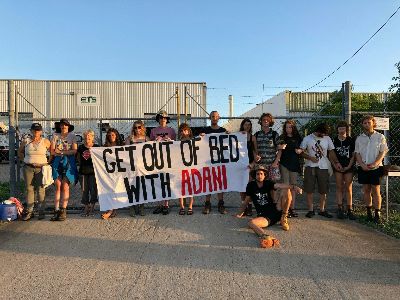 New Adani contractor Eastern Tree Services found themselves locked out of five premises in three states this morning, with citizens blocking work trucks at another two premises.
Additional locks and chains, as well as signs calling for ETS to ‘get out of bed with Adani’, meant staff needed angle grinders to get into work. Trucks wanting to leave industrial sites in Brisbane & Townsville were blocked by concerned citizens.

ETS, a large privately-owned company, operates tree clearing services from 20 sites across the country. They start tree clearing work at Abbott Point Coal Terminal this week and sources confirm ETS have accepted a contract to clear the rail corridor from Adani’s controversial Carmichael Coal Mine to link in with the existing railway travelling to Abbott Point. Jai, a spokesperson for Frontline Action on Coal said:

“ETS must listen to the majority of Australians who do not want Adani’s coal mine to go ahead and completely rule out destroying precious bushland for the proposed Adani rail corridor.”

This is not the first Adani contractor to be the target of long-running protests, with prior campaigns leading to banks, insurers and contractors ruling out supporting the mine. Emma from the Brisbane blockade protest said:

“Big businesses need to understand that if they work with Adani they will be held accountable for the damage to the reef, land, culture and climate that will ensue if Adani’s dirty coal mine goes ahead. Adani contractors like ETS will find themselves targets of ongoing protests until they rule out working with Adani.”

“Adani fail to get approvals and keep their promised work deadlines time and time again. They cannot be trusted and should not be allowed to build a climate wrecking coal mine that Australia doesn’t want, and the world doesn’t need.”