A dramatic week on the climate frontlines 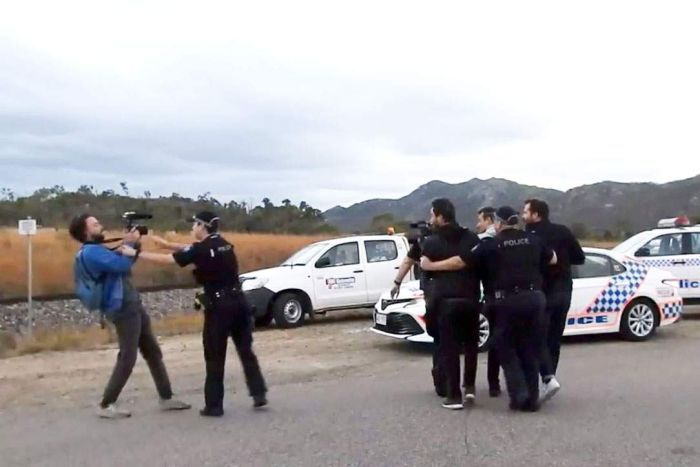 Journalists arrested and harsh court rulings made for an eventful week on the frontlines of climate action around Australia.

Monday morning began with two people blocking entry to Adani’s Abbot Point coal terminal just north of Bowen. Matilda Heselev and Emily Starr locked themselves to a concrete barrel at the entrance to the port, stopping access for six hours.

That was somewhat overshadowed on the day though by the arrest of French journalist Hugo Clement and the three members of his crew who were there filming. Clement had been in Australia a few days working on a documentary about damage to ocean ecosystems. In the end he got a much more experiential view of Australia’s concern for oceans and those trying to protect them than he maybe would have expected. Clement was charged with trespass and given bail conditions saying he couldn’t go near the Adani mine, though the resulting media outcry is probably the best free publicity any filmmaker could hope for.

But the message it sends about Australia’s treatment of journalists critical of the standard government line on climate change and environmental issues is not a good one. As Clement said, “if everything is OK and there isn’t a problem, then why do you want to arrest journalists?”

Within a few days, and following a meeting between Queensland police and the French ambassador, charges were dropped for the film crew. But the legal drama didn’t end there. Emily and Matilda, who had been the ones actually blocking the road, faced court on Tuesday. There they challenged bail conditions forbidding them from returning to the property where they had been staying. They were unsuccessful in doing so, and in fact the magistrate prohibited them from remaining in the town of Bowen. It’s common for bail conditions to be used to stifle protest activities (under the guise of “risk of re-offending”), but restricting freedom of movement by banning someone from an entire town (with a highway running through it) is a bit more extreme.

Around the country this week there were other coal-related dramas in courtrooms. In Brisbane, 26 year old Alice Wicks was ordered to pay $61,000 in restitution to freight company Aurizon for an action in April stopping coal trains for five hours. Restitution is traditionally ordered for charges related to theft or damage to property. Using it in these circumstances, when property is only temporarily rendered unusable, just seems like the court seeking new ways to punish protest activity.

In Newcastle meanwhile, Tim Buchanan was found guilty of blocking a train. Though a train was stopped at the time by someone suspended from a tripod, Tim was 70 metres away filming. Under the letter of the law, the court is within its rights to find him guilty as a party to the offence. But it is rarely done in cases of civil disobedience, where the customary approach to sentencing is summarised by British judge Lord Hoffman’s ruling: “Civil disobedience on conscientious grounds has a long and honourable history in this country… But there are conventions which are generally accepted by the law-breakers on one side and the law-enforcers on the other. The protesters behave with a sense of proportion and do not cause excessive damage or inconvenience. And they vouch the sincerity of their beliefs by accepting the penalties imposed by the law. The police and prosecutors, on the other hand, behave with restraint and the magistrates impose sentences which take the conscientious motives of the protesters into account.”

All this certainly makes for a dramatic week. As temperature records continue to break, natural disasters as improbable as wildfires in the Arctic occur, and experts warn of extreme threats to biodiversity; people all over the planet are demanding we take drastic action to reduce carbon emissions. History would teach us societal change rarely comes without resistance from those invested in protecting the status quo. This is what we’re seeing now with court and police repression, alongside government and media demonisation.

One would think creating a sustainable future for our entire planet would be a cause everyone could get behind. But it doesn’t look like that is likely to happen. Those of us who care about climate change and want to limit the damage before it’s too late will have to battle against powerful forces intent on destroying the entire planet for the sake of their own interests. Many have decided it’s worth the sacrifice – as court cases this week in three different cities illustrates. The events of this week also show it won’t be easy – averting climate catastrophe will take a lot of commitment, courage and as many hands on deck as possible.